Sony 18-105 F4 OSS Lens IRL Review- The Sony 18-105 F4 OSS is one of the cheapest G lenses available. For those who are not aware, G lenses are supposed to be Sony’s higher end line up. this is difficult to decipher how Sony breaks this line up down, because they also have their Carl Zeiss branded lens line up (and its more likely these are actually Zeiss designed Sony made lenses, vs the Zeiss branded Sony made lenses in their compact line up/Xperia line up). Sony also has their G-Master line up, which also created confusion. I still don’t understand the differentiation, despite Sony putting out marketing material trying to differentiate them. Anyways, this is the only G lens e-mount available for their APS-C line up. There are a few G lenses for the full frame line up, indicating that Sony seems to be emphasizing the full frame e-mount as the professional lineage. Kind of crappy considering there are a ton of a6000 users, and the a6300 price is begging for fancy pant glass to compliment the body. I’m hoping the a6300 indicates Sony is more likely to drop some nicer glass for APS-C users.

Anyways, totally off topic before, but that’s the meaning of G lens. Its kind of like L glass, but with confusing branding with Zeiss and G-Master. The 18-105 stood out to me for a few things. The range is awesome. Lots of wide end to work with, and enough telephoto to catch most shots as a walkaround lens. I’ve definitely found I barely use my telephoto lens at all (55-210 OSS).  so 105 is a great tele end for me. I also like the fact that its a constant aperture F4- not incredibly fast, but plenty enough light for me to be ok with it being a walkaround lens. Finally, OSS! Big fan of having optical stabilization, even if its common now for most lenses/bodies these days. I grew up with digicams having no stabilization, and being mind blown when it was implemented first as a high end feature, then as a standard feature. Nice. One more finally- I’m a sucker for branding. I know. Shallow. But having that fat G marker on the lens makes me pretty proud of it. It feels like a lens that truly matches the power of the a6000. Anyways, I’ve had the lens for nearly a year, and the following is my IRL (in real life) review of the 18-105 F4 OSS e-mount lens. 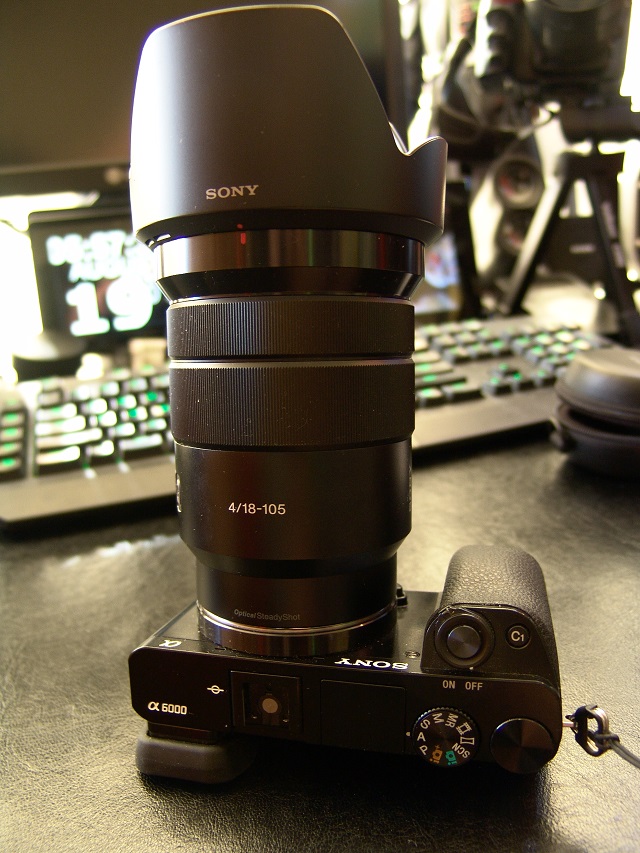 Design- What a fat lens! I’ve been told that it is surprising that the lens reach is not larger given the size. (its cause the constant aperture!). Its a looker for me- while lenses are not necessarily chosen for looks, there are some that are just bizare to me, like the 16-50 F2.8, with unnaturally huge/fat ring dials. This looks sleek and balanced on the a6000. I’m a big fan of the constant aperture – its a common walk around lens focal length for Nikon and Canon equivalents (albeit full frame). Its a clean body overall. I wish they had put a control for OSS on the lens itself, rather than leaving that to the menu system- I like to switch it off when I’m in tripod mode, so that’s a bit annoying. There are two ring dials on here- one for zoom by wire, and one for focusing. There’s also a zoom toggle on the lens itself. It fits perfectly where your hand will go. This is a lens that begs to be shot at eye level- its just too long for handheld away from the body shooting. Its also surprisingly larger than the 16-50mm PZ lens. I understand a few compromises were made to make that kit lens so tiny, but its quite a bit smaller (and slower!). Also, that lens hood is ginormous. Finally, while I would appreciate a 24mm equivalent on the wide end, like on the 16-50mm kit lens, I’m not missing it that much. Also I’m shooting this shot with the DSC-F828 here- you can see the purple fringing at the edges. Oh 2004 flagships.

Build Quality- This is the first e-mount lens I have that is not metal build. I’ve actually been less of a stickler of this- its super apparent that metal build, while nice, does not equate to quality in the e-mount range at least (i.e. poor image quality in a lot of the e-mount range). Its mostly plastic in build, with a metal mount. Truth be told, it doesn’t bother me all that much.  EDIT- its all metal! I just noticed the wear on the lens body- I’d guess aluminum. Funnily enough, while superficial damage like that would normally bother me, I take it as a bit of pride, that it reflects how much I use this lens. It has wear, because its being used. Because ITS SO FUN TO SHOOT WITH! Anyways, it feels great. Not a creak anywhere. The lens fits snugly on as well. The rings move smoothly, no issues. It definitely feels premium. One year on, and just some wear on the edges, where it meets my bag. 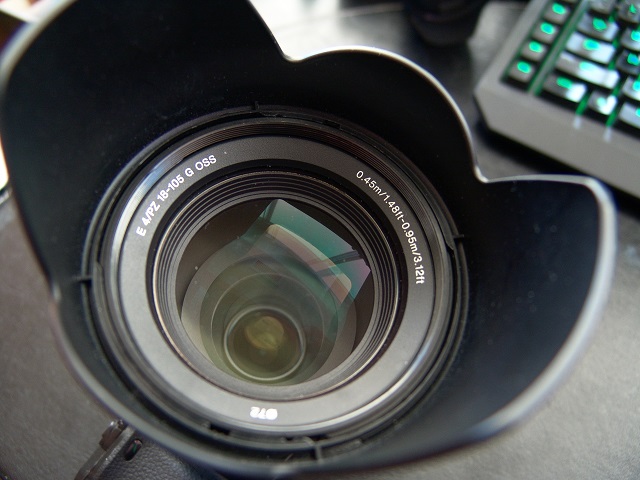 Handling- I hate fly by wire. I would absolutely love to have a manual movement lens over fly by wire zooming. Sony has done their best to provide fast/slow zooming based how much pressure you put on the zoom toggle/how fast you spin the zoom ring. It works, but its slow. I much prefer a manual zoom ring. However, it is helpful for video, since its not as jerky. However, I don’t really shoot video with this so….moot point.  I do find the zoom ring zooms faster than the toggle. I just find it slow to zoom in when I see a shot arise suddenly. I find it balances well in my hand with the body, and the combo is just perfect for me. I also find it works well with the a6000 AF system- its fast. Fast enough for me for shooting my kid. Fast enough for street shooting, so you don’t look like a dolt pointing a camera at people until AF locks. I like that a lot.  I walked around witht his lens in a night market and it was awesome. It gave me 28mm for a lot of my landscape stuff, and 105 mm when I needed to zoom in on things discretely. It also worked surprisingly well at night. F4 is faster than a lot of typical lenses in this range, but not that fast. Coupled with the night shot mode on the a6000 (multiple exposures to combine for one detailed shot), and I was perfectly equipped to walk around at night, without having to swtich out lenses. Of course, the 35mm F1.8 OSS is a dream night shot lens, but I miss out on a lot because of the fixed focal length. I can’t zoom with my feet all the time. I think you can see I love shooting with this lens. That’s really important- if you love shooting with the lens, its being taken out more, and you will be getting shots, vs. leaving a spectacular but clumsy setup at home because its inconvenient. 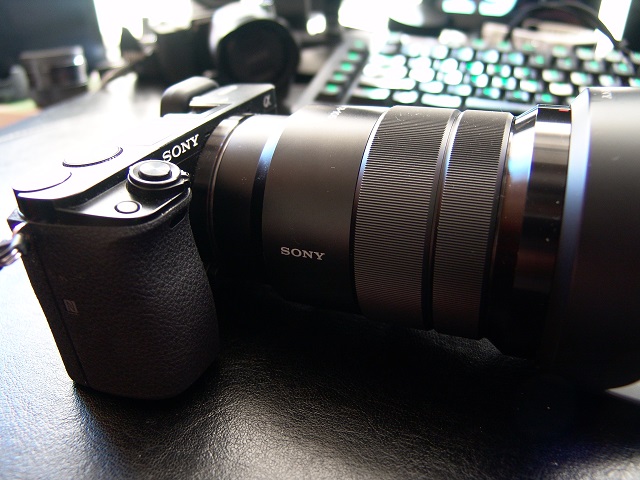 Plenty of grip on those ridged lens lines- personally, I would have preferred a nice grippy rubber, but that’s fine here. One thing I didn’t mention is that 28mm is a bit tight for selfies- this is important for me with my kid and wife. Add the heavy heft of the lens, and its super difficult to selfie with this camera. Meanwhile, the 16-50mm lens is amazing for selfies because of that huge wide end, and light handling.

Metal e-mount. Nice. I’m not entirely convinced that a plastic mount is that bad- I was told it would wear out prematurely, but I haven’t had any issues with my plastic Nikon f-mount lenses. Another thing I have with versatility in this lens- while I would love a standard zoom with a constant f2.8 (or for Sigma to freaking make their 18-35 on an e-mount), the 18-105 (27-157.5mm equivalentish) range would be super difficult for me to let go. I quite like the versatility this provides. I really hate missing shots because I am switching out lenses.

Huge front glass element. This is a really large glass element. I really don’t think this would be balanced well on any NEX-3/5/5000/5100 line cameras- they are just too small for a larger zoom like this to be easily handled. This lens deserves eye level shooting with a larger body. It would fit great on an NEX-6/7/6300 as well. Even the a3000 would be a great fit I think.

Image Quality- The big giant million dollar question here- the reviews are quite mixed on this lens. Despite the G lens moniker, a lot of compromises had to be made to keep it at the price point (I snagged it for quite cheap before the USD exchange blew the price up). Its one of the cheapest “pro line” lenses available, including other brands (i.e. Nikon gold ring, Canon L line). Reviews generally stated good center sharpness throughout the range (nice) even wide open, some issues with corners throughout the range, and totally oddball distortion throughout, that is difficult to correct. Fortunately for the latter, I shoot primarily JPEG (blasphemous I know), so the JPEG auto corrects the distortion nicely, and I never notice it in shots. If you shoot RAW, you will see weird W shaped distortion throughout, that is now available in lightroom for correction. Meh. I find I don’t care enough to post process most shots, so it doesn’t matter to me.  You will notice this on the NEX-5, where it does not have in body JPEG correction.

The sharpness is interesting. I initially thought it was a big deal- that I didn’t have a whole lot of reasont o upgrade from the kit PZ lens because the IQ difference wasn’t that big. I can say that after shooting regularly with both lenses, my real world comparisons show a better rate of keepers with the 18-105 vs the 16-50. I don’t find corner softness to be a big deal in my shooting, and I usually shoot wide open. Center sharpness is awesome enough forme. The bigger issue of whether its worth it for e-mount shooters to move up has been settled for me at least. I find the 16-50 to produce shots with lots of visible softness that doesn’t really bother me, but if I can help it, I would rather keep the 18-105 on, and deal with the extra bulk, so I can get the extra sharpness. You can read all the resolution charts- I particularly like the ephotozine review, to compare. I’m not sure what I can comment on OSS, as I don’t do a lot of before and after shots with OSS turned on and off. I ususally just leave it on.

Conclusion- I love this lens. Its not mind blowingly amazing in terms of IQ (the 35mm F1.8 OSS gets that award from me), but its a definite step up from the kit lens. It provides great versatility with its zoom range, and constant aperture, focuses fast enough for street shooting and my kid, and it handles so so so lovely on the a6000. Its a perfect pairing IMHO on the a6000. Because the handling is so awesome, I shoot with it all the time, and making it fun to shoot with, means I shoot more overall. Nice. I am not a fan of the power zoom, but that’s a minor niggle that I have learned to deal with. I’m sure it will come in handy one day, when I do more video on the a6000. I’d replace it for sure, if I broke it.

TLDR- Pros- I love this lens. Its super fun to shoot with. Cons- I hate power zooms.