VAIO Pocket 40GB DAP IRL Review- The VAIO Pocket (pocket from now on) is a digital audio player/photo viewer that was released in 2004 just a few months after Sony’s Walkman division released its own NW-HD1 Network Walkman to compete with the iPod (might have been 3rd generation at the time I think). It was an interesting player because it was made by the computer division of Sony, rather than its Walkman division. It was also interesting because it was absolutely weird looking- you really have to use this Pocket first to understand how it works. I don’t believe there was heavy marketing behind this player, and few people are aware of its existence. After randomly scouring local used classifieds, I managed to find one in absolutely mint condition for a song. I was lucky too- I found the VGF-AP1L version with 40GB- the other version VGF-AP1 was 20GB. After using it for a few weeks, I’ve come up with an IRL review for this bizarre and rare DAP.

Design- this is just weird looking. When you pick this up, there’s no way you know how to process what you are holding. The lump on the side makes EVERYONE who picks this up try to open it up like a clamshell device- I’m thinking everyone recalls the Sony CLIE NV series that had a clamshell style. So when it doesn’t do that, they get confused. I think it looks fantastic and weird. Its got huge elements of VAIO’s design language- it especially reminds me of the A desktop replacement series of laptops from VAIO. I really think they were trying to make something that was distinctly different from the iPod, like making it a landscape oriented player instead of portrait oriented.  the weird series of bumps on the front? That’s the trackpad to control the device, almost like a laptop trackpad. But its not immediately clear how to use it because it doesnt use a cursor! And the screen is a nice color screen- something that blew minds away when the iPod Photo came out. I recall another DAP havign a color screen- it might have been iRiver possibly at the time, and that was cool even though it was a low res, low color gamut, washed out screen. The Pocket had a color screen when it was a massively huge feature to have a color screen. The device was THICK. Its like holding a bar of soap- but uncomfortable. Its totally opposite in size from the NW-HD1, who’s massive claim to fame against the fat iPod was its slim design. The Pocket was bigger than the iPod. Overall, I think its neat looking, certainly because its different, but neat doesn’t make it a good lookign design. I think it jsut looks weird straight up.

This device was also  designed to be used with its LCD remote- while these were largely on their way out at the time of release, it was still cool to have one. Players were generally getting small enough that you didn’t need to have a remote for them anymore (unlike something like a portable CD player, where it would have been easier to tuck the player in a bag and use the remote. I would argue that the remote was actually an integrated piece with the DAP and really didn’t work well as a stand alone player.  While the remote didn’t look as well designed as some of Sony’s other remotes (I’m especially a fan of the remote that came with the D-Ej01 Anniverssary CD Walkman), it still looks like a premium piece of kit. 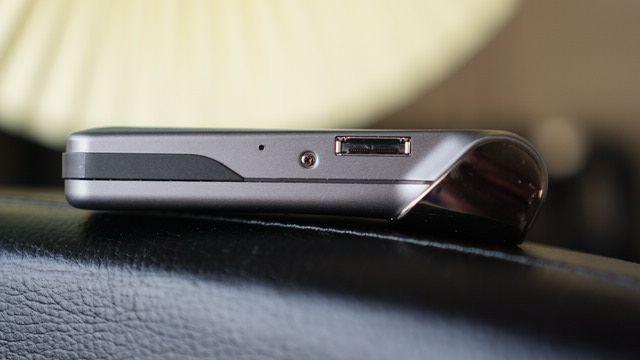 Build quality- this is one of those devices that makes you feel you could protect yourself from danger by using it as a weapon. Its a dense player- it feels luxurious. Its solid metal almost the whole design. Even the chrome piece is a metal build – unlike most other chrome highlights in products (i.e NW-HD5 uses cheap plastic chrome). I’m uncertain if the screen is glass or plastic, but it has held up well for a 12 year old DAP. There are no scratches or dents on this player. Its a freaking brick, and it handles like a brick too. This truly feels like a Sony pinnacle product, something I would put alongside the ZX1 and ZX2. Nice job here Sony.

Usability- This is probably my biggest gripe with this player- its just a pain in the ass to use. You use the touchpad to control where on the screen you are trying to select. Its not directly translated- tapping one part of the touchpad (called G sense ) doesn’t translate to the same spot on the screen. It takes a bit of practice to use this, and even when you get it, its cumbersome to use. Thankfully, the spots on the G sense pad with media controls work directly- you can press the adjacent square and the control will be signaled. Unfortunately, these squares are so freaking tiny, you really have to focus on the player and clarify where you are pointing. Not cool. I think a big thing about the iPod classic was that it just worked- once you learned how to use the Click Wheel interface, you could use it almost blindly. I don’t get that sense with this Pocket. I also find the spinning hard drive a bit slow to use- but nowhere near as bad as the NW-A3000’s HDD speed. Probably one of my biggest gripes is that they proprietary screwed the heck out of this- you can ONLY use the cradle to do any data transfer, or charging. RIDUCuLOUS. The HD1 had this issue, but a follow up cable was available (a mini dock as stupid as that sounds). DONT LOSE THE DOCK. Sony really screwed the pooch here with that. I can see you needing to carry a charger to travel, but not a freaking dock.

I don’t think the remote is that well designed. Its a little unintuitive in use and it makes it a bit pondersome to use. I’m thinking of other remotes like the RM-MC40ELK that actually works perfectly with the NW-HD5. On here, the remote just becomes awkward to use. It is a higher resolution than most of Sony’s previous remotes (even with the newest stuff in recent years like the bluetooth SBH52 and SBH50!) so that’s nice. I really hated that the RM-MC40ELK was such a tiny display, despite the remote size. So this remote at least has that going for it. Overall, not too bad, but not great. The media control buttons are generally responsive and better than pressing the tiny buttons on the unit itself, but they never seem to be just right. Just odd mostly.

Its all metal. Its all sweet. 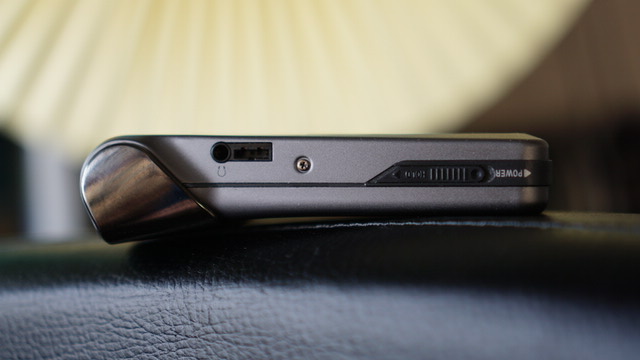 Battery life- its pretty meh at this point- it lasts about as long as the iPod 4th gen- maybe 8 hours of continuous use. I don’t know what the original battery life was like. What I do like is that replacing the batteries is actually not that bad- it uses OEM batteries that can be easily procurred off eBay- its just a matter of disassembly and a few disconnections- its documented online so that’s nice. I don’t use this long enough at a time to need to replace the old batteries, and I’ve come to appreciate a device that still works. I don’t want to risk installing new batteries just because of proof of point. It is nice to know the batteries are readily available right under that chrome hump though.

Sound Quality- probably my second biggest gripe with this player- it sounds fairly meh. There’s just a lack of detail and oomph across the soundstage for me to like this player’s sound. It doesn’t respond well to EQing- bass boost makes it muddier. I would put this behind the Walkman Z- while I didn’t like the Z because it was too flat/clinical, the Z was at least detailed. The Pocket is not clinical and its not fun sounding. Its just meh sounding- its probably close to my budget friendly Walkman E series. There was just no way this player could be touted as an iPod competitor when it’s sound was so meh. Unremarkable is what I would summarize it as.

Other- I liked that the dock has a line out- thats useful for stereos and amping. Except I don’t really like the sound quality of this player….so its a bit of a moot point. I also like taht it came with a dock and remote- I miss the days when buying a device came with a shite ton of accessories. Everything is pretty much bare bones now.  I do wish it came with a carryign case though- even the crappy cloth case with the HD1 was better than nothing. I also really like the dock- as much as I don’t like how necessary the dock is, I like how much thought went into it- the metal stabilizing ring can be folded up into the dock to make it compact for traveling. You can see the proprietary connector right here. The back of the dock actually has a USB connector so you can hook up your camera and transfer photos over- at a time where flash memory was hella expensive (128 MB would have been easily over 150 CDN), 40 GB for portable storage was sweet.

I also don’t like how even using SonicStage as the music transfer software lets me properly transfer mp3 information like album art- you can clearly see that Marilyn Manson is completely mismatched with No Doubt’s album artwork here. I gave up caring about this. It shouldn’t have been an issue though for an expensive device. 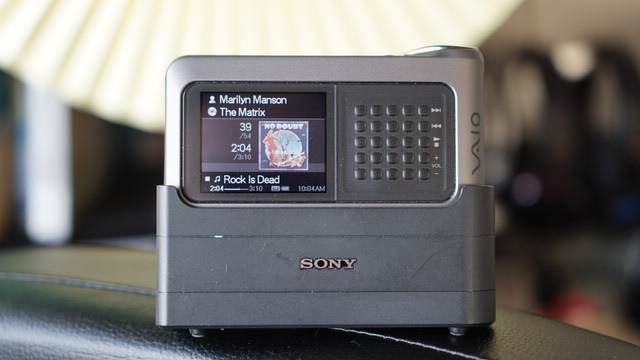 Conclusion- The Pocket is an oddball device that seemed to be different for the sake of being different, without being very good at all. Generally, the only thing that I would say was actually good about this was the design being one of a kind. Other than that, there are limited reasons to get this player. Its one of the own it for the sake of it being unique and that’s it. The sound quality is meh. The usability is meh. The battery life is meh. The proprietary charging and syncing is ridic stupid. Only the build quality and design is good. I’m not surprised it didn’t become a instahit. I would likely not buy this again if it broke.

TLDR- Its a weird device. The only pro is it being different for the sake of being different. Its a really different looking solid brick of a design. Cons- meh sound quality, oddball UI you never get used to using, some lag with the HDD, handling is generally annoying.