Sony Smartwatch 2 Review – The Sony Smartwatch 2 (I’ll call it the sw2 for short from now on) is Sony’s third attempt at making a smartwatch for Android. It was released in 2013 I believe to little fanfare. I managed to snag the black metal one with a metal strap for a minor discount in the Boxing Day sale and then about a year later I snagged the silver one with the metal strap for less than a third of the MSRP. Having used the sw2 extensively with both my Samsung Note II, LG G3 and Sony Xperia Z3 for some time, I’m ready to let out my In Real Life Review (IRL).

Design– I love it. Straight out love it. It looks like a real piece of jewellery rather than a gadget. In particular, I like the silver model’s matte finish. One of the problems with smartwear is that it tends to look like super technology and it doesn’t necessarily blend in with your business attire. While some of the tech community may scoff at the idea of something’s looks and consider that as shallow, I very much believe that the adoption of technology must be done in a way where it doesn’t impede on day to day functioning – this includes not standing out in a professional workplace. The sw2 does this perfectly. Part of it is its super masculine squared off design. I’m not a fan of the rubber strap model as it looks a bit glunky. You can see the signature Sony circle power button on the side here.

Comfort- This is super comfortable overall. As long as you have the right fit- the bands are easily adjustable. I didn’t quite understand when I saw a Sony employee with a thin wrist wearing it with all links on with like 4 inches of give. I lucked out with the silver sw2. It was the perfect number of links and it didn’t come with any others as a used model. I digress. The watch fits fine and doesn’t get in the way. However, any type of exercise with the bending of the wrist will actually jam the watch in pretty hard into the hand. So I don’t recommend it for sport actually. It doesn’t look like a sport watch anyways (although you can get the runtastic app for it). I have had multiple times where it jammed in and popped out parts (check out build quality). So its good for office wear, not good for physical wear. 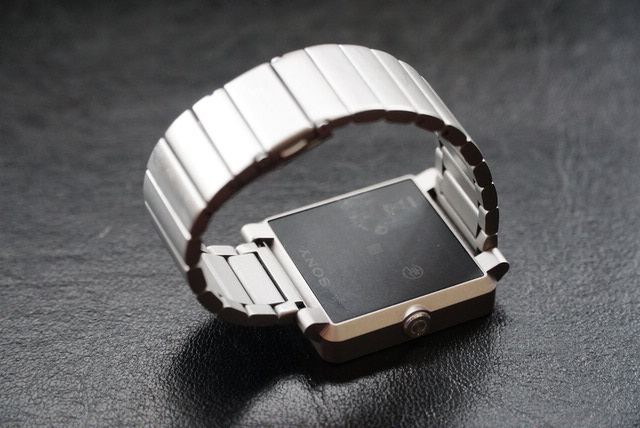 Usage– It’s a shame really. Rigth after this, Android Wear came out and effectively killed off development for the sw2. I knew that was coming but I didn’t think it would be that soon. That means that software for the sw2 is farily minimal and it’s a dead OS basically. That’s fine for what I use a smartwatch for, in that I just need notifications. But it’s a far far more limited animal compared to the Smartwatch 3 with Android Wear. Things like using Google Maps on the watch for pedestrian navigation would be nice, but only with Android Wear. I’m annoyed for sure about this- this was a 180 dollar CDN watch and Sony really dropped the ball here. It did that with its two previous smartwatchs (LiveView and Smartwatch 1) so I mean that’s the big issue with Sony anyways- great hardware, terrible software.

I’ve also run into a few issues where the sw2 struggles to repair with the phone when it has been disconnected. The good thing is that with the sw2, is that it has NFC, so it’s a simple tap to pair and then it is fixed. However, it is annoying that it happens. This tends to happen even more when I have two sw2 watches. That makes it annoying but tolerable. I do find that more often than not, it re-pairs after being disconnected by itself. So its not a huge huge everyday problem, but not something you expect from a 180 dollar device.

Generally I have not had any issues with any of the Android devices I have paired it with- there have been no issues of stability with Sony, Samsung or LG. So that’s cool I guess. I have also been able to use it with a variety of devices simultaneously like the Sony Smartband and SBH50 Music device. No issues. Finally, its been pretty reliable with giving me notifications- I do wish it had a LED indicator as well, but that’s nitpicking. It does get notifications a split second later than my Smartband, but that’s not a big deal at all.

Battery- The battery generally last two full days, but on some days, if the phone doesn’t pair with it properly after a disconnect, it jacks the Bluetooth radio to nine million to try to find it, and then it burns out the battery within hours. Thankfully, it recharges with micro USB and I have tons of those lying around. And it charges quite fast with microUSB.

Build Quality- This is one thing I have a real problem with- overall it feels like a premium accessory that matches the price tag very well. Its got just enough heft to make it feel luxurious. The majority is metal and glass, with a plastic bottom for the NFC radio. However, the entire device sits inside a metal shell that has poor gluing- the end result is that the unit will actually shift outside the shell. Its definitely not something you expect in a premium device. While the device is waterproof and dustproof, these little things make me feel uncomfortable around water. A shame really. The above pic shows the SW2 in the official Sony brown leather band- love this color combination. However, it does feel rather lightish to me – a much different feel on the wrist than the metal band- definitely feels less premium IMHO

Conclusion- This is a pretty basic smart watch that has lost most development support after Android Wear came out. I like the styling, and build quality generally. Reliability and usage has been good. Its a good but not great smart watch. In this time and age of Android Wear, its probably not worth it to get this watch unless heavily discounted. There’s just too much to be had with Android Wear currently to get a proprietary OS watch like this one. Its a shame really, because I think this is much more stylish than the current Smartwatch 3. Its just too basic really- I use it for notifications and that’s it really. No official notification support from major apps like Whatsapp either. Too bad.