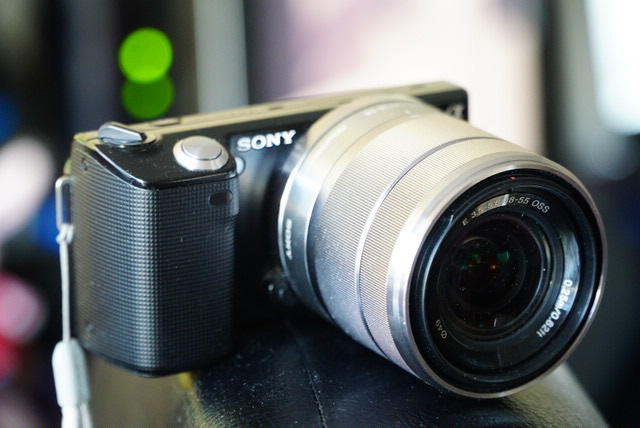 Sony NEX-5 ILC Mirrorless Camera IRL Review– The Sony NEX-5 was a huge hit for Sony back in 2010. It fortold a huge shift in camera technology; the ability to provide DSLR quality in a much smaller package. It was also a shift in the market to focus on the enthusiast class camera- the need for consumers and not just professionals to have huge sensor cameras for better image quality. At the time of its release, I was about 1.5 years into my first DSLR, the Nikon D90, and it was pretty much a no from me to get into mirrorless. I had already spent a good chunk of change on my F mount setup and it didn’t make sense for me to get into a new system. I do vividly remember being in MarineLand and being fairly jealous of another tourist using a NEX-5 next to my clunky and very heavy D90+18-105 lens combo on a very hot and humid day. That was a point where I thought how grand it would be to have a smaller shooting combo. Years later, I would end up getting the A6000 and killing off two birds with one stone (large sensor and portable camera). There were definitely moments though, when I would be shooting and switching lenses and thinking wow, it would be good to have a second body to minimize time lost switching lenses. And hence came a NEX-5 in the used market for quite cheap earlier this year in summer. I’ve had the NEX-5 for about 5 months and the following is my IRL (In Real Life) review of this remarkable but aging mirrorless camera. 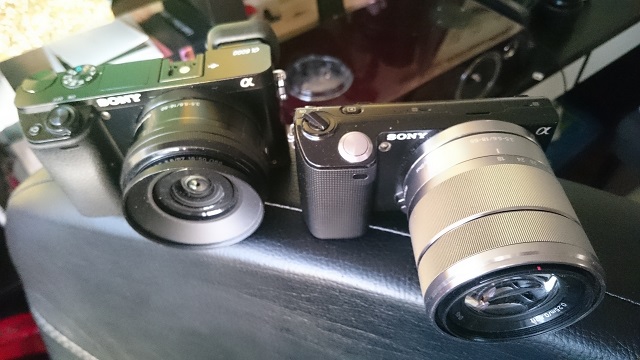 Here it is next to its modern brother, the a6000. I would equate it on similar terms because the NEX-5 was the flagship model compared to the NEX-3. The a6000 is closest in specs to the NEX-6 and NEX-7 that followed after, and it now remains the flagship APS-C sensor e-mount camera. I believe they were both similar priced in the low 800 CDN dollar range on release. You can see the kit lens has changed dramatically – the older 18-55 OSS has similar aperture speeds, but is mechanical zoomed and much larger. The newer 16-50mm OSS loses some of the tele, gains more wide end, and is an electronically controlled zoom. The newer 16-50mm is much much worse in terms of lens characteristics- barrel distortion is wild on it and it requires significant software adjustment to control it- its very apparent when you switch the bodies, because the NEX-5 does not have the ability to adjust software fixes for lenses. Nevertheless, I find the convenience of the smaller lens much better for everyday shooting, because it fits in a much smaller space in my bag. There have been debates about the older 18-55 being a sharper lens, but I am not seeing it in my shooting so far. It may be sharper, but its not noticeably different. Both lenses are good for everyday shooting but not much after that. They do lack a critical sharpness that I would not risk on an important event. That being said, they are sufficient if that is all you have. I notice that AF acquisition is much slower on the NEX-5, as is shot to shot time. Not surprising, particularly with the former, given the a6000 having the big hoopla over AF speeds. The NEX-5 also lacks a built in flash, which is ok, since I do not really use it. It lacks a hot shoe, which is ok for most of my shooting conditions. I do wish it had WiFi for sharing because I do share a lot immediately with the a6000. It also lacks microUSB charging, but gets a big win by having a wall charger, which I love having. This charger lets me charge a spare while I can continue to shoot, whereas the a6000 is disabled from use because the battery charges in camera. Lastly, build quality is quite similar between the two- its a mixture of aluminum and plastic. It feels aluminum, not magnesium. Generally, this means it feels like a premium camera, but is not quite on par with my previous magnesium beauties like the Nikon P5100 and P7700. Handling is good on both still. The NEX-5 does not have the big giant grip like the a6000, but its design lets the fingers wrap around it quite securely. Overall, its a good second shooter to the a6000, but not really as a primary shooter in this modern day and age. I think the current low end e-mount models like the a5100, would easily surpass it in usability and speed, despite being budget models. 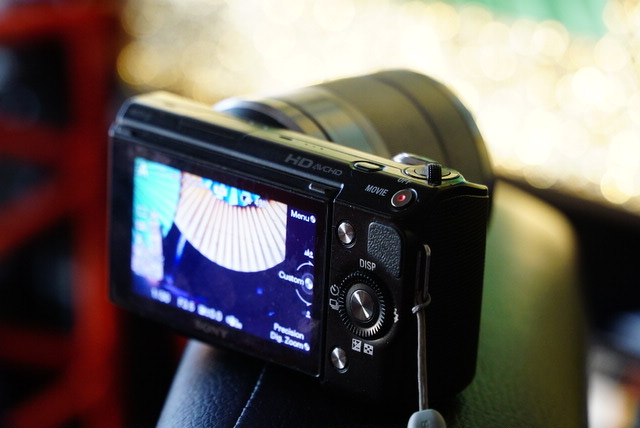 Image quality– its actually very similar to the Nikon D90 noise levels wise. Noise creeps up after ISO 800. Its bearable at  ISO 1600 but I would prefer to shooting lower if possible. The a6000 definitely trumps it in this regard for high ISO shooting. Aside from that, the lenses that I have used with the NEX-5 do not really do it justice and this has lead to most of my NEX-5 shots to be pretty meh. Its original lens line up was pretty bad. I primarily shoot the 16mm f2.8 and wide angle converter to get a 21mm perspective. Its a soft combo, but there is not really any other lens that I would prefer to handle on this compared to my a6000. E.g., the 35mm f1.8 and 18-105 f4 both handle much better on the a6000 because I shoot with the viewfinder most of the time with those lenses. So I cannot really fault the image quality on the NEX-5. Its good but not great. You would actually do better with an entry DSLR with a kit lens than this one. The 18-55 is that meh. I took much sharper shots with the Nikon 18-105 VR kit lens on my D90. Its a complaint I think that is warranted on the NEX-5 because it was meant to replace a DSLR for people that did not want the bulk, and it just does not seem to do that job with the lens it was offered alongside with. You really need a sharper prime to go with this, and shooting arms length with a prime that is not wide angle just does not fit in my line of work. Thus the use of this as a second shooter. I end up maxing the in camera sharpening, because I do not really do much post processing. I tried a few movies with this, as you can see the big red dot up there. Again, nothing particularly amazing. I think the biggest accomplishment was more about its size than its image quality, and it was just not there with DSLRs competition wise. That seems harsh, but mirrorless has really jumped ahead since its release and they can comfortably shoot alongside DSLRs, if not surpass them now. 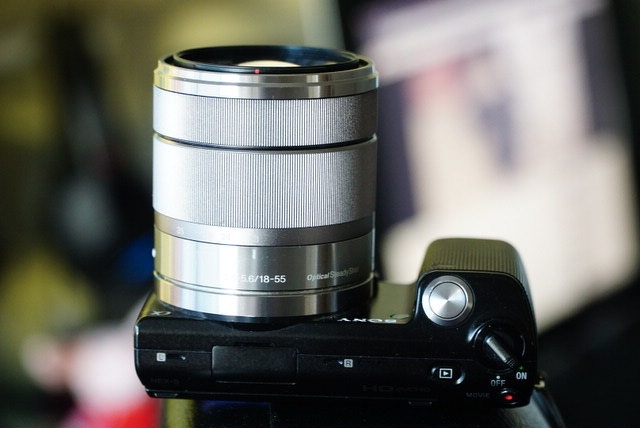 Design-I spoke a little about its design previously- I quite like the huge barrel and tiny body design here. Its unecessary now, considering what the much smaller 16-50mm can now do, but looking at its silver and black design makes me smile regardless. Its a neat design, and a big departure from the big hulking black DSLRs. Much more comfortable for the mom and pop shooter. And that is also perhaps its greatess weakness. It just was not an intimidating camera control wise, and while that made it accessible to those who hated shooting, it really limited it for the enthusiasts. I am not buying that Sony thought the NEX-3 and NEX-5 were both marketed to the less serious shooter. The price difference meant that only an enthusiast would consider the small advantages of the flagship worth it. I believe that is why the NEX-7 came out afterwards, to bring that level of control that an enthusiast would want  (similar to what the Nikon D90 was marketed torwards). That said, I have learned to work with the NEX-5 menu system and make it work to my shooting needs, although it is a bit more cumbersome. I also really like the weight of this camera- its substantial enough to feel like a premium item, but it is not so heavy as to make its arms length shooting design to be cumbersome. Mounting a telephoto on this would be kind of blah in turns of handling, hence why i shoot mostly the kit lens or wide angle on it. 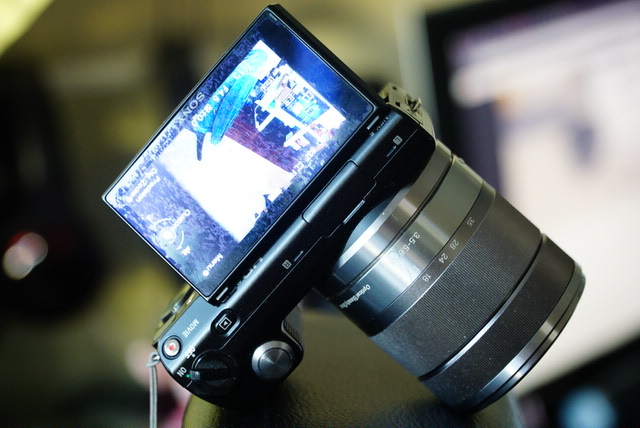 My biggest regret with the NEX-5 (which is due to my brief time with the NEX-5r), is the lack of the selfie LCD. I foudn that really really useful on the NEX-5R and P7700. It just makes selfies very very easy. I do not feel bad or lesser of a photogrpaher because I like selfies. It makes a huge difference taking a handheld shot vs. setting up a tripod and remote or asking a stranger. The LCD only tilts this high in this shot, so it does not help. Furthermore, the LCD was also a good indicator that the shutter had gone off. It also has a very crappy anti-glare coating that rubs off after a few years, like you can see here. This is common on almost all NEX cameras, and definitely frustrating. There are ways to get it off, but I have not bothered. Its an aesthetic issue that does not bother me as much. 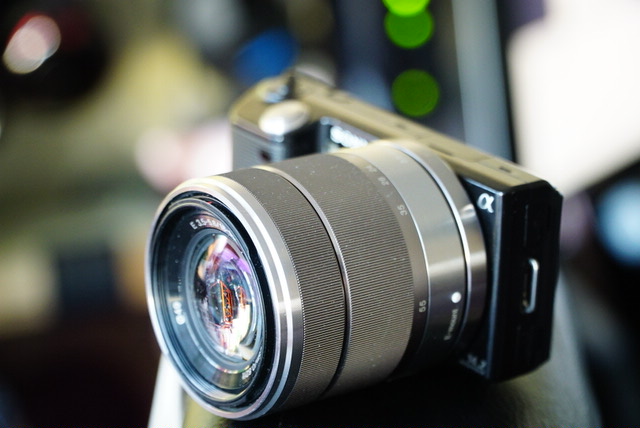 Miscellaneous– battery life is fine on this, I have not had any major concerns about stamina on it. Its made a world of difference to have multiple batteries (the NEX series all share the same battery AFAIK), so that has helped a lot at event shooting. Its also a very discrete sized serious camera, so that means that I do not get stares in public like I would if my d90 was whipped out. Also, the shutter is LOUD and there is a double mechanism that I still do not get. Its very noticeable compared to the a6000. 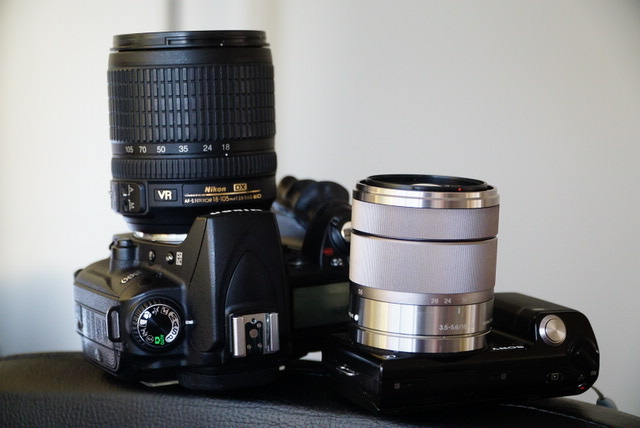 Conclusion– the NEX-5 was a great camera in its day, primarily for stripping down the weight and size of the big APS-C sensor cameras, as you can see here compared to my D90. That was its primary selling point, being super tiny and making it easier to handle and easier to carry. That was great, because it meant you could actually bring a big sized sensor camera in a small bag, even a jacket pocket if you mounted a pancake lens on it. It however, was nowhere near the capability of an enthusiast DSLR like the D90. The operating speeds were slow, AF was slow, and image quality was meh with the kit lens. Have those been rectified in the e-mount range is another question. I believe they have- the newer e-mount cameras have much more lenses to choose from and the speeds and image quality are much better. Its worth in today’s market is pretty low- the entry level a3000 and a5000 could do a better job than it in a lot of ways. But that is not the point. It was a great pioneer in its time and brought a real challenge against the big guns of Canon and Nikon that have yet to be answered in any meaningful way, and that has really changed the camera market to where it is now today.