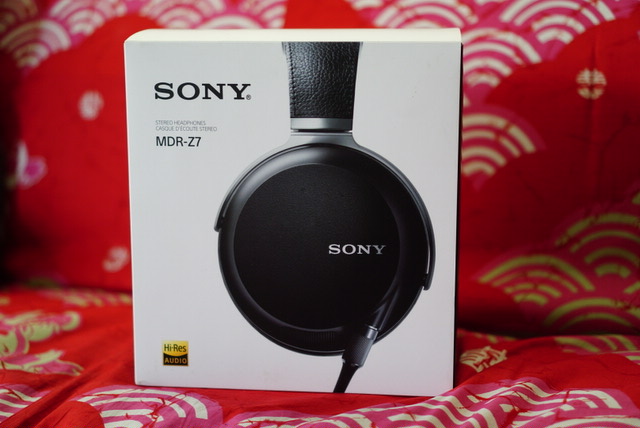 Review- Sony MDR-Z7 Headphones; The Sony MDR-Z7 headphones are the current 2014-2015 flagship headphone for the Japanese giant. Part of a recent audiophile push by the consumer company, it marks a return to high end audio after a long hiatus. While it had been making audio products for some time, it withdrew from the high end market after the Sony MRD-SA5000 headphones were discontinued. I do not consider the MDR-1R series to be a high end headphone, as they were marketed more for the lifestyle consumer base that Beats by Dre was hitting hard and dominating. Sony appears to have seen a potential growth market in the upscale audio market after seeing people willing to pay much more past the 300 dollar mark that Beats broke into. E.g.- the Sennheisser HD800’s massive love on Head-Fi despite being a plus 1500 dollar price range. I purchased the Z7 this year in February and the following is my IRL (In Real Life) review of the Z7s.

The Z7 was released last fall after a a lot of hype over at Head-Fi. Sony’s engineers even went out to meet Jude from Head-Fi to get his opinion on the can. It was designed to surpass previous flagships like the SA5000 or Qualia 010 or R1 (not to be confused with the 1R). Leaving no expense behind, the design took premium materials and style into account with the audio quality. It is no doubt a design that is aimed past the 300 dollar Beats market and more into the audiophile world. 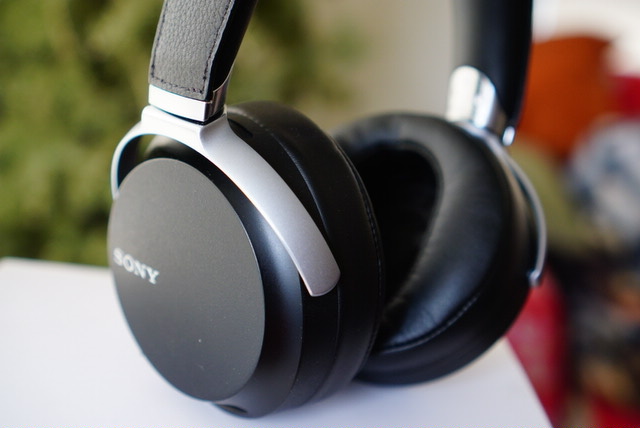 Design – I wasn’t blown away by the Z7’s when I first saw them. Compared to previous Sony cans, these were remarkably tame in design. They reminded me quite a bit of the Fostex/Denon DXXX line up with basic circular cups and headband. The more I use them though, the more I appreciate the simplicity of their spartan nature. Although they lack to wild hangar design of the SAXXXX series, they remain stylish and timeless. I could use these ten years from now and not feel they were ostentatious or outdated or trying to hard to be modern or futuristic. 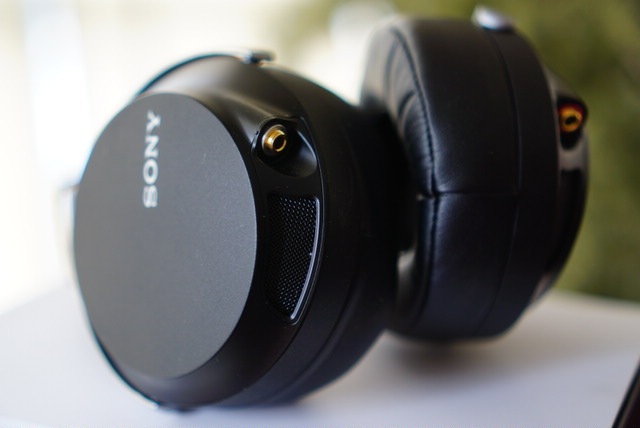 Build Quality- The headphone uses premium materials and certainly feels like a 700 dollar headphone- magnesium cups (yes!), and metal (maybe aluminum) arms with real leather headband complete a premium feel. I think the cups and lower headband are a leatherette material but they don’t feel any less premium. It may be that they are trying to avoid the hard leather issues that the SA5000 experienced as the leather aged. In general, I wouldn’t want to drop the cans because they are so nice, but I don’t feel like I need to baby them. In comparison, the MDR-SA3000 are ridiculously fragile feeling and I use them like I am handling eggs. I also like that the cables are removable, although they are a propriety design (dual 3.5mm jacks). The cables feel premium as well and have a nice flexible thick plastic design with nice machined metal tips. I quite like the cables, although I am curious what the Kimber Kables are like. I kind of wish Sony just included the Kimber Kables right from the start, but I guess this is another way for them to make money. 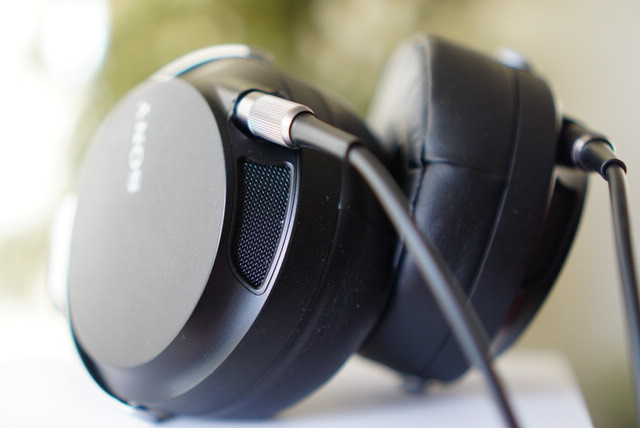 Isolation–  These headphones are semi-open, meaning that they have ports that allow air flow in and in turn, noise. Open vs. closed headphones are always at debate – on one hand open provides easier engineering and tends to produce better sound quality. Closed provides isolation and places greater restriction for sound quality because its confined space. Sony decided to skip the fully open flagship designs it used before and go for a semi closed design. The result is one that lets in some sound but not really. Its somehting that I think is fine for the home environment it was designed for. It was not meant to be a portable can, so I don’t mind that it doesn’t totally block sound or prevent sound leakage to neighbors.

Propriety cables from Sony- although not necessarily propriety, they are very unique being balanced cables with 3.5mm jacks. This means that finding a replacement cable is much more difficult and annoying. You cannot just swap out another 3.5mm cable. It doesn’t bother me as much because the cable feels quite sturdy and not in need of a replacement, although I would have preferred a shorter cable. 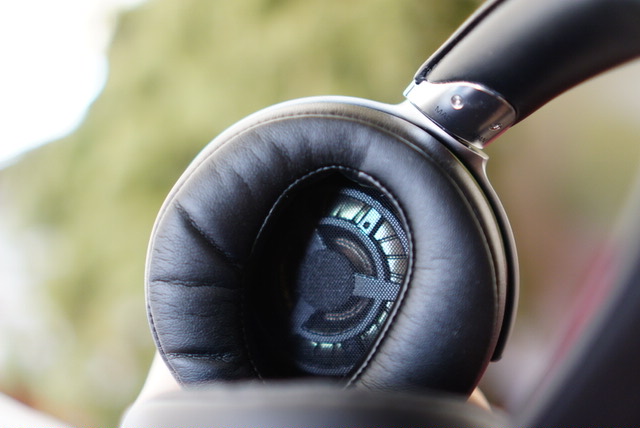 Sound Quality- You can see the monster 70mm aluminum coated drivers here. The last time Sony used these drivers was in their MDRXB1000 cans and MDR-MA900 cans. Both were well received, although they were not necessarily considered audiophile level cans. Another big difference here is that the cans are not the biocellulose diaphragms that their older flagships used. Those were unique bacteria produced materials that apparently sounded amazing (I haven’t heard any of them…yet). So now the big push with “Hi-Res Audio” has aluminum coated diaphragms on everything that is their flagship. Unfortunately this doesn’t seem to be guaranteeing agreements with sound quality across the board. Generally the consensus has been mixed if not negative. What I consider it to be is an upscaled MDR-1R. This is not necessarily a good thing for everyone, especially for audiophiles who are looking for the detail monsters that most flagships convey like the Sennheisser HD800 or the older Sony MDR-SA5000. What it does seem to be good for is for a wider range of music, rather than any one particular genre. Most audiophiles would agree that high end headphones cater to a specific type of music and that it is really dependent on your preferences as a music listener. What becomes challenging for a mass market producer like Sony is that they are trying to appeal to a larger scale of audience vs. smaller scale audio companies like Audeze. In the latter case, most listeners will likely be listening to well mastered specific genres and typically not mass produced music like pop. Sony on the other hand is trying to reach a much larger audience like Beats did. So the challenge is making a headphone that appeals to the masses and not just the audiophiles. So I would say that it is not necessarily the Sony of the old that made the absolute best for discerning enthusiasts. Instead the sound quality appeals to a wider range of music genres and becomes muddied because it tries hard to reach across too many items. Jack of all trades, master of none. I still haven’t decided if there is a specific type of music this excels at. I would say that the bass does seem to be loose and at times muddy. This takes away from the overall sound stage. However, I do think that it is detailed enough to warrant flagship status. I just don’t think its a clear slam dunk. I’ve never been more confused about what I think about a headphone’s sound signature as this one. I do quite like it though- mostly because I don’t have to switch headphones constantly as I change songs. I am also a fan of the heavier bass presence it offers over more detailed cans like the MDR-SA3000 I have.

Comfort- These are so so so comfy. The big fat headband and the ear cushions as soft, supple but supportive, like a good pillow. I don’t have issues wearing these with glasses or wearing for long periods of time. It really is like a refined MDR-1R. Very very comfortable.

Value- I honestly am not a person to spend a grand on a flagship can like most audiophiles are with the Audeze line and such. I managed to snag these for half off on a store closing sale so for me these are awesome priced. I would have reservations getting them at the MSRP of 700 bucks though. Given that I would have reservations about any headphone at that cost (never mind the two to three grand people drop on STAX), I don’t think I am the right customer anyways. I certainly feel the design speaks value-it is leaps and bounds higher in quality than their old MDR-SA3000 which was the same MSRP. I just don’t think the sound quality is there. Given that I am absolutely Sony biased, I think I’d still edge on eventually buying them at MSRP but its not a slam dunk for me. In the end I think flagships are rarely there for value- you pay much more to get minimal gains and it is the consumer’s decision on if that is worth it. 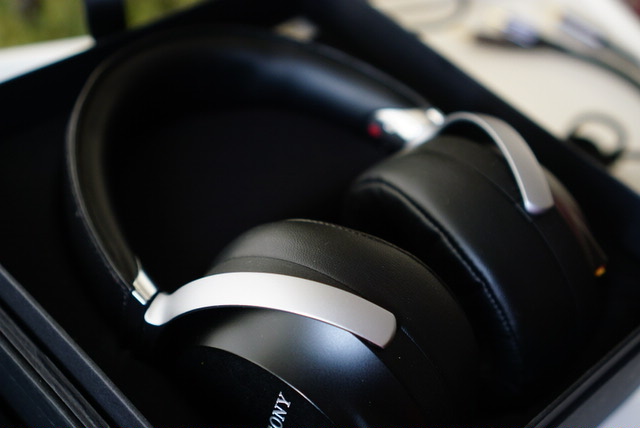 It wasn’t the huge box opening cool process a flagship warrants but maybe that is Sony saying we spent more money on the headphone’s quality than the marketing materials. I don’t know. I like that it is serialized – it makes it feel more special.

My current listening set up is one of my faves- the MDR-Z7, NW-A3000 Walkman and PHA-2 Headphone amplifer. I actually picked up the amp specifically for the Z7 so I didn’t have to be tied to my desktop’s amplifer.

Conclusion–  Just like any flagship, its hard to say what the value of an item is for conclusion. Especially in audio circles where it is so subjective. I love the MDR-Z7. I’m not sure if I would if I wasn’t a Sony fanboy. I love the premium design and feel, and the wide range of music it can handle. I love that it is very very comfortable. I don’t love the lack of precision it has- it lacks the sound quality punch that most audiophile headphones have. But what it does have, is a punch for being a flagship for the masses. This might not sit well with audiophiles- it says that Sony could have done better and made a better product. Instead its made a product that appeals to a wider group of consumers. This reflects the struggle Sony has- its in a money losing time period and has lost the mainstream market. Its considered too mainstream to appeal to the hard core enthusiasts. Which market does it pick? I liken it to Lexus’ F series. Lexus is associated with the comfort and reliability of an upscale Toyota. The F series is supposed to be the performance tuned division. But how can you have performance mated with luxury? You have either a high revving hard turning machine or a smooth, sure ride. You choose the middle, and you compromise both sides. The Lexus RCFis like this. Its not upscale enough to be fully comfortable and its not hard turning enough to be fully performance driven. What it does offer is something for somebody looking for a bit of both. Will the customer recognize this? I’m not so sure of that. I’m certainly glad I have them and would buy them again though.

TLDR- Pros-Excellent/luxurious build quality and design, great fit and comfort, ability to handle a wide range of music Cons- muddied bass, audio quality not up to par with other flagships