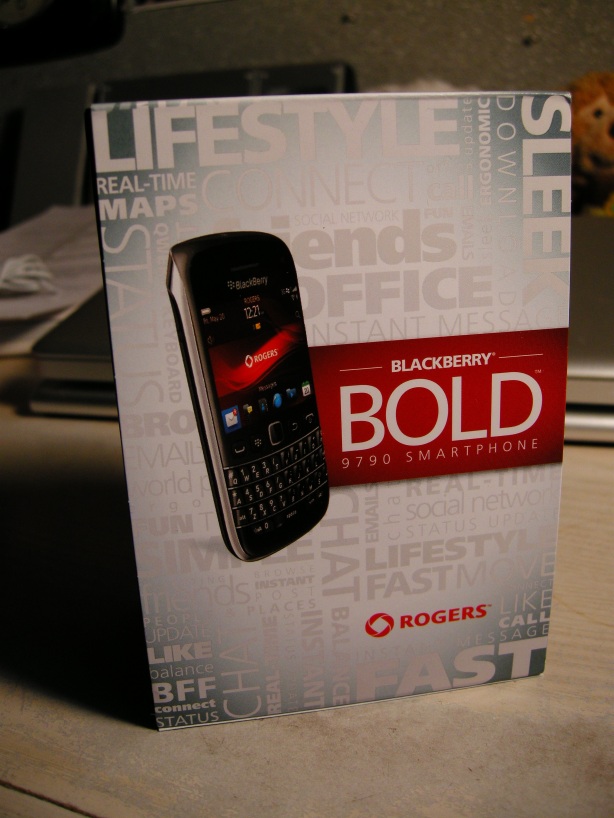 So Rogers called me last week to offer me free Wi-Fi calling to overcome my dropped calls. Since I never complain about drop calls to them, I am not sure if this is a random offer to market new services or devices or if they legitimately believe I live in a poor reception area. Anyways, so they offered me that and a new Blackberry (either the new Curve or Bold). Since the new Bold is actually a downgrade to my 9900 Bold, I am pretty much saying no, I do not want to pay more money for a device, extend my contract or add more monthly fees. Turns out, I didn’t have to. They really are just offering a free phone. Thats pretty sweet, even if the phone isn’t the greatest.

Here she’s looking all nice and in her box, still untouched. I wasn’t super impressed with the overall phone, but I like the size of it (its much more comfortable in the hand than my 9900), and its alright overall. Just not really impressive, like when I picked up the 9930 at Bell downtown and immediately demanded one from Rogers the next day.

My faithful 9900 alongside its new companion, which will goto my sister. I really wish these were still the status symbols the Bold line used to represent, like in the 9000 when it came out. I remember throngs of people coming over to look at my phone, while nobody cared about the iPhone 3g that had just been released. And now it is a pitiful reminder of what greatness it used to be. A lady in my office remarked to another about her new iPhone “Wow, you went to a smartphone from a dumb phone, and not just some entry level one, you went to an iPhone!” I kept my mouth shut, but it was a painful reminder that Blackberrys are now considered bottom of the pile for smartphones and my fan favorite is just a glorified QWERTY text messenger in the eyes of many. I hope it gets better in the fall when BB10 comes out.