Brought the Sony NW-HD5 mp3 player back to life. I remember loving every little thing I could read about it. 40 hours of battery life (still in the time of the 12 hour iPod), great audio (when the iPod was considered and still is considered by many to be sub par in sonic performance), a flashy red color, an ability to use inline LCD remotes that I had come to love from my MiniDisc players, and an exclusivity that I could not get enough of (I even went so far as to flash it at the Sony store and when they asked if that was the new iPod, I smuggly commented that it was one of theirs but was a USA exclusive). 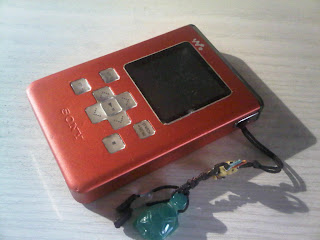 The thing runs off of SonicStage 4.3, the worst music management program ever made. At least it runs M3U playlist files, so I can export from iTunes and reimport them into SS, instead of manually creating each playlist, as I had done before. It still runs great, but of course compared to the multitasking monsters these days (where all dedicated digital audio players are threatened by smartphones, and even the iPod touch is considered a near relic without constant data connection) it just doesn’t sit well at all. It is unfortunate that the rm-mc40elk remote I imported through eBay in Japan just doesn’t work well anymore. A new one runs for 70 bucks and they are a rare breed of accessory indeed, as nothing Sony makes uses them anymore. Its not worth it for me to upgrade the remote, as I have come to love using headphones only. Maybe back in the day of the MiniDisc it was cool to have the remote, but now it seems more of a hindrance than anything.

Not really sure what I will do with it yet, as its primarily audio only but we will see. Its nice seeing this bad boy back to life. I remember signing up for some internet plan and getting a first gen iPod Nano for free, selling it right away and getting the NW-HD5 off eBay as soon as I got the cash. I was so excited I even told my mentor teacher about it, and told him his iPod was terrible. He looked at me like I was crazy and laughed.

Btw I am loving the dual screen setup I downgraded from my triple monitor setup. Its more focused and I feel that I can concentrate better with two screens rather than the three that was more of a showoff thing.