Went for a beautiful Saturday morning run by the River Valley today. Had a great time enjoying the chilly morning air running through my lungs, and made quite the sweat going up the long hill by Victoria Park. It was really nice to see lots of early morning joggers too. Just a pleasant morning overall. The Saskatchewan River is beginning to break up and show itself. A pleasant look over the city’s downtown on the south side of the Groat Road bridge. 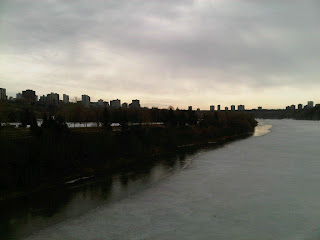 This is such a nice padded running lane across the Groat Road bridge. It gets a bit dusty with all the cars crossing and I am wildly terrified of dropping my keys off into the river. I usually clutch them for dear life as I pass the bridge. 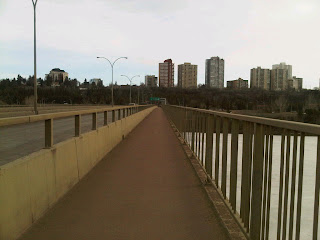 And two breakfast burritoes, sausage McMuffin, caramel cappuccino and a carrot muffin at my fave restaurant. 🙂 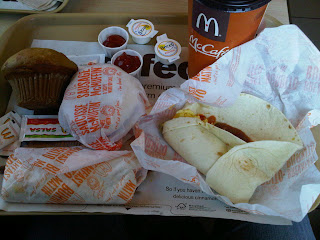 The morning was clearly topped off with a solid breakfast at McDonald’s where the girl with poor functional communication offered me a specialty coffee instead of the regular brew. She phrased it as “you qualify for an upgrade, cause you bought this and this” which sounds like you get it for free. Which it wasn’t. It made my regular coffee and muffin almost two bucks more than usual which would have been fine if she stated that in the beginning. The caramel cappuccino I picked up was alright and really nothing much more different than what I’ve had at Starbuck’s (which I really am not a huge fan of). Anyways, I think I will stick to my regular favorite brew. For now, I’m going to enjoy the last cup of coffee and chill out on W’s balcony with the afternoon sun, some good beats and several overdue client reports.