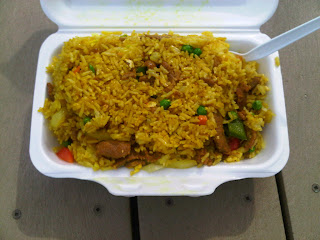 Three claireview trains and zero century park trains in 15 minutes. Thanks for being efficient and promoting transit use ETS.

Had a delicious curry beef fried rice at Ho Ho’s Chinese Food today. Just the right amount of spice and the tenderest of beef bits. So yummy. And I ate it outside in the gloriously warm afternoon sun. Which contrasted dramatically to the hellhole of tension and anxiety inside the clinic. Yay!

Also went for a run outside for the first time of 2011 and it was soooo great. Instead of thinking how much time is left like on the treadmill, you think about where can you go next. So awesome. Also deterred a teenager from doing something highly suspicious in W’s condo today. Thankfully my clinical skills have taught me how to show assertiveness as well as just recognizing all the du$b things I used to do as a teenager. Crisis averted. I’d like to think that my monster arms also frightened the kid out of doing something stupid. 🙂

And to now add on for the night, am trying to edit a report in under a hour, debating about whether I should chug the coffee that makes me so alert but screws up my sleep schedule and just overall feeling behind. Blah. Again. Im really glad the sun stays out late in the night now! At least theres one silver lining.