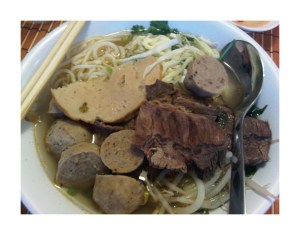 M and J’s place last night was quite swell, had a fantastic time poking fun at C, chilling with my homies, and having a darn delicious dinner all homemade and quite delish. There was the soup, some spring rolls, homemade fish sauce (my fave, with little chilies to add a touch of fire), and a nice dessert of some gelatin like dishes. We finished the night off with watching Korean popstar Rain’s epic American debut, Ninja Assassin, which sounds a lot dumber than the movie actually was. Lots of great uber violence and destruction, over the top action, and terrible romance scenes. I dig. Also bought Smirnoff Twists, which taste somewhat like medicine, which would be a result of the black cherry flavor. Yay.