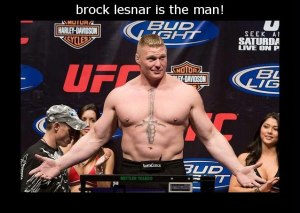 This guy is the effing man. In last night’s UFC fight, he took the craziest beating from Shane Carwin. For the first round, Shane (who has won all his fights within two minutes of the first round) put up the craziest fight I have ever seen, easily making Brock look like a human punching bag. He was incredibly bloody and beaten, and at times was on his back, a first for the big man. To see him actually get up from the first round was incredible.

In the second round, Brock and Shane high fived each other in a nice gesture of good sportsmanship that Brock seems to have gained since his insane health issue over the last year. And I ignored the corner call that Shane was gassed out from trying to finish Brock off in the first round. Sure enough, Brock handled Shane like a champ, taking him down and ignoring the ground and pound he is infamous for. Instead he went for the submission and choked out Shane (because Shane was apparently completely prepared for ground and pound but not submissions).

An incredible fight and a serious inspiration for me in the gym today! I hit the gym hard today, pressing like crazy with good control and doing a nice circuit- flat bench, jack knives, dips and flyes, essentially hitting my pecs, abs, triceps/delts and my pecs again in each set. As well, I went to failure for bench, leading them to be hit super well. I dig. My chest feels awesome right now.

I skipped out on veggies tonight (too lazy) and had eggs, rice, imitation crab meat, meatballs and protein powder, giving me a good dose of meat and carbs. Sweet.

Sent via Blackberry on the Rogers Wireless Network