I almost would have put Nickelback at the very end, and not behind puddle of mudd, in devolution! Interestingly enough, the Alternative genre was created because nobody could decided if the early 90s music was rock or pop. So they just made a enw genre.I was pleasantly pleased to have heard Bush “Little Things” on Sonic while doing to dishes today. I need to buy Sixteen Stone on CD soon. Green Day has a new album next Friday, I might pick that up, I’ve liked what I’ve heard so far from their new single.

Jia left for Africa last night, or technically, early this morning for a month and a bit excursion. He will play some important role in medicine that I am not quite aware of and feel somewhat guilty and ignorant for completely forgetting just what he was actually doing there. Fortunately he is creating a brand new blog to detail his escapades and surely I will learn from there!

Of course the other thing in Africa is ebola. Which I still find completely fascinating and mind blowingly terrifying. There are of course other things in Africa that are far more important and pertinent but ebola is just so incredible!I don’t even have much to blog about it, other than OMFG it Ebola!

I don’t know why the human psyche is so fascinated with the mysterious, dangerous or unknown aspects of this world, but there is just something that intrigues me ever so slightly about the grotesque nature of this virus and its kill rate. Of course I am pee in my pants terrified of it ever becoming a widespread epidemic and would gladly sit through reruns of Outbreak instead and watch Morgan Freeman and Dustin Hoffman save the day. Actually instead of that, I would like to talk about headphones. Again.

You know for a while I had nixed the idea of picking up the Nixon Master Blasters cause it seemed outrageous to buy a set of headphones for style. Especially when I don’t really intend to wear them outside the house. That leaves only one real alternative for a set of cans at the price range I was looking at- the Grado SR-125s. In case you don’t know, the Grados are a set of cans that are kind of like sleeper cars- highly subdued in appearance, but overwhelming in performance. Kind of what I need for in home use. Unfortunately I keep turning my eye to the Nixon’s given two things- I am a name whore/love Nixon, and they are made of metal and leather. I am a sucker for build quality.

Sometimes I see things that just scream “Look at me! You need me!” This is one of them. They are incredibly good looking and reviews are not half bad at all. Mind you, a lot of reviews are comparing them to say, the Sony Mdr-v700djs, and I won’t get started on those phones, or how bad their fake versions sound. 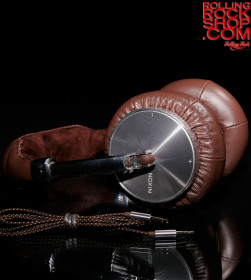 Gizmodo gives them an ok review, as does CNet, both sites that I like, but don’t really hold high in terms of opinion. Ok, well CNet I really don’t hold that high at all, after terribly stupid comments like how VR is only available in certain modes on their last camera test with the Nikon p5000. I’m gonna hit up Watch It! and check these phones out soon.

I tried out the new Nikon d5000 at Futureshop today and I can safely say I am still confused about its pricing and target bracket. It comes out to just about 200 cdn bucks cheaper than the d90 with the 18-55 VR kit lens and yet has several things that annoy me, like a lack of top LCD, AF motor and a terrible grip. The grip is absolutely horrendous for a camera crossing the thousand dollar bracket. It reminds me of another camera I also hate, the Rebel. The build quality is terrible! Not to mention that tying you down to DX only lenses is a huge pain. Hmph. I know that its just a release price, but at the cost you get what, an articulating LCD for a terribly slow/almost useless live view ability? If AF lock was faster, it might be more useful, but as of now, its really only useful for macro shots, where time isn’t as important.