Today we dropped Will off at the airport so that he could embark on his next stage of life in Toronto. It was both a fun filled and numbing. I’m not really sure what I would describe it as, but the damn weather didn’t help- overcast and cold. At any rate, I think we were more or less prepared for the fact that he is moving to the other side of Canada.

We pulled up to the Edmonton International Airport in a suspicious looking white van, christened “White Tiger”. It has the capacity to haul a lot of friends, followed with lots of fun! Surprisingly very little luggage to haul in the back.

Will and Jeff right before checking in the baggage!

Will gets onto the checkout line for his baggage, and following him is everyone else- just in case.

I feel like this photo would be pretty cool had a giant metal pillar not been in the way.

And this is where I get yelled at by the airport security for taking pics! That’s Will in his last moments before entering the tickets only area. I yelled at Will to look at the camera, and then airport security yelled at me to turn off my camera. Good thing they never actually forced me to delete images, as I have heard of on some forums.

We manage to catch the last few minutes with Will, by creepily staring from the observation deck. This would later provide a pleasant platform for hilarity.

We make giant letters on the scrap paper that Jen has with a super huge Sharpie. Messages include We love you, We miss you, I’M ON A BOAT, and something equally awesome. And with that, Will boards the plane and he’s off! Good luck!

We found somebody driving with his foot awkwardly out the window near home, and decided that was awesome. Hilarity follows!

Its always interesting when somebody leaves. If it happens late at night, you goto sleep and its not at all bad. But when it happens during the morning/day, you have the rest of the day to realize somebody has just left. It kind of leaves a downer for the rest of the day. I probably should have gone out with friends, but I ahd a few things to do. Like um getting ready to get my damn learners.

I have come to realize that one of the worst things about a DSLR is carrying it around in a safe and effective manner. For instance, today whilst running amok in the airport, it was a super pain in the bum to worry if my camera was getting smashed inside my Hurley messenger bag, which was designed for laptops, rather than big giant cameras. I have been thinking of picking up the Lowepro d300AW bag as pictured above, which would be sufficient to pack most of my camera gear, as well as a few other things. The biggest problem lies with how much I would use it. It would only be useful for photo only excursions and does not allow the storage of other useful things such as my gym stuff. 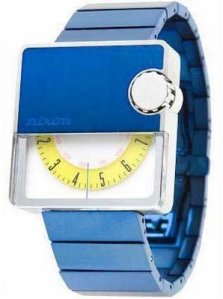 I also managed to sneak some time to go into Watch it! with Sijie yesterday! (Finally!). Get it? Sneak time? Ok not so funny. But I loved the Nixon Murf. Unfortunately, even at a slightly lower price, at $400 CDN, it is still too much for my spending power. I would rather put that towards the next camera on my list!

I managed to finally handle one of these bad boys at Black’s Photo yesterday and even though I only had it for a few minutes, I was convinced. The fast f2.0 lens, wide 24mm focal length and an overall great looking camera convinced me I could have my cake AND eat it too! I loved the retro style, but more importantly, that it still has all the power I need in a convenient sized package (important when say hauling a DSLR in an airport is a bad idea). I intend to save my monies and well see what happens in the fall. If Canon and Nikon release something snazzy to compete with the LX3, and not something dumb like adding more zoom, I will consider other camps. But right now, I am pleased with the build quality (which turned out to be not that bad, since I always had the impression that the Canon G10 was the tank).

This probably isn’t that important, but I am pleased from this blog that the 18-105VR kit I have performs well enough against the 18-200VR and at such a small price! I know the 18-200VR isn’t something to rave about in image quality, but I am happy that my kit lens isn’t a poor piece of useless. I was also pleased from reading the DPReview forums, that the Nikon D90 performs equally, if not better than the Nikon D300. A pleasant surprise! I don’t feel so bad about the D90 anymore!

Also pleasing was that I went to handle the Sony Alpha 700 the other day, and although I still like the grip, there were a few things about it that bothered me enough, that I didn’t have buyers remorse over not buying the Sony. I loved the handling, but a few things checked me back to reality. The lack of an overhead LCD for settings was sort of a pain. As well, the fact that high ISO performance is ranked lower than the Nikon D90 (important since most of my shots at indoors) was another major issue. There are a few more, but I no longer feel bad about not jumping on the Sony camp.

I need to go study.