In what will be yet another post dedicated to the beauty that is the Nokia N82, I will first begin by saying OMG THE NEW BATMAN MOVIE LOOKS SO KILLER BITCHIN.

^warning large link to trailer.
The first picture is a picture of the n82 taken with a Nokia N95 8GB. Equally good in non flash situations, but unfortunately no xenon flash. Unfortunate because its sexy. Ha ha. I think I define sexy differently than other guys.

anyways heres the kicker. more pics from the Nokia N82. And perhaps in the most awesome upset in my life…well not really, but the Nokia N82 is now said to be comign in white in Q1 2008.

“A completely white-colored N82 is planned for Q1 2008, but the product manager also talked about the many requests for the color black, so this is another color that we can expect in ‘08. ”
-gadgetnutz.com

Anyways thats so so awesome. I’m excited because that was the one thing I didn’t like about it, the shiny cheap look. It looks good in some angles but others, horrendous. Perfect for me, because by the time I buy it, it will be cheap and it will be in the color I want.

Anyways here’s some more sexy shots from this phone.

And in this picture, these lucky bastards are at the Nokia house in Finland where they get to try out the new phone. The one dude in this picture, is Mark from thenokiablog.com, an awesome awesome site.

And in this one, with flash on, the camera has not overexposed at all, well at least in this thumbnail. Its a lot better than I can say a lot of point and shoot cameras can do, judging exposure and flash level appropriately.

Heres the phone taken with the phone. Ha ha.

And just one more thing, in a surprising upset, the Sony Ericsson k850i, long considered to be the big contender for best camera phone, has been clearly unthroned. I was originally intending on getting that phone, but a)the last iteration had horrible firmware, the k800i and k790a, and b)the quality is horrible in comparison to the new Nokias. Like theres not even a chance or close call, as gsmarena.com would say. Check it out- first pics are done by n82 and the 2nd is the k850i.

Images courtesy of Flikr and NokiaUsers.net

Here’s the link to more pics from the n82; 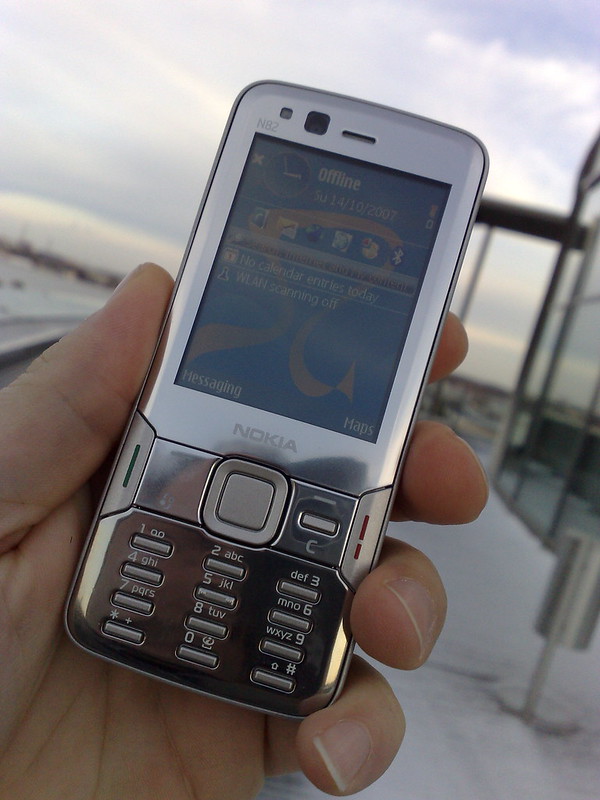